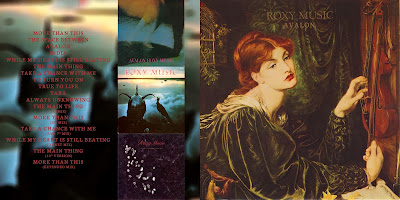 I love this album and feel that Roxy Music and Japan were playing New Romantic/New Wave before it even existed.  I wish I had been into music when this was released, I wonder if I would've liked it.

I found a review on Amazon that pretty much says everything -

This was the final studio album for the band, released in 1982. A lot had changed in the decade from their debut to this swansong. Glam, punk and disco had come and gone. Synthpop was the new thing, and that would dominate most of the 80s. While Avalon is not strictly a synthpop album, synths dominate it but they are used to create atmosphere. Most of Ferry's songs were now more or less 'moods' and 'textures' that were carefully and concisely sculpted into pop songs. That does not necessarily mean it's a bad thing, but it saw the end of Roxy Music experimentation. The band are still strong here though, Manzanera's guitar does more than it's fare share of percussive backing, shimmering chords and colourful solos. He's pretty much like The Edge in his approach in my opinion. He makes sounds you don't instantly recognize until you dissect them. The horns are strong too and McKay is in great blowing form, all the soprano atonal cries are still strong and stick inside your mind for a long time after you hear them. The rest of the band are session men, such as Alan Spenner on bass and Andy Newmark on drums, speaking of which, make Avalon a very percussive album. Some songs start with a rhythm box, then the main drums come in topped with all kinds of hand drums and percussion.  Few bands could argue with a swan song like Avalon. Few bands ever sounded remotely like Roxy Music. Avalon is a classic, don't be fooled by Bob Clearmountains clean, radio friendly production. Just sit back and let it take you away. The end.

Preferred the single pic sleeve to the album cover, so flip-flopped that.  As for the tracks, the remixes at the end are the highlight for me, as I have also included a Dreamtime remix and a Cygnet remix among the commercially released.  The fan mixes are better.