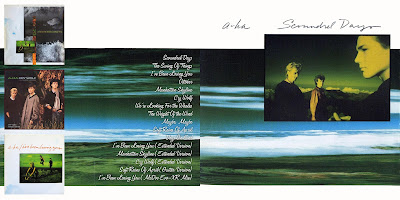 My little sister was "into" A-ha about the time this album came out.  Secretly, I was too, but would never admit it.  I remember we were at Venture, a store similar to Target, in the Chicagoland suburbs when she made the decision to finally buy an A-ha album.  She had both HH&L and Scoundrel Days to choose from.  Having heard most of HH&L, I was eager to hear Scoundrel Days, and I tried my hardest to talk her into purchasing it.  But, she had only heard stuff from HH&L, so therefore, that was what she was determined to get.  I was pissed.  To this day I still prefer Scoundrel Days over the debut album, but at least now I have both. la la la.

People often made fun of A-ha for being pretty boys making synth music.  But, we are now looking at more than 30 years, and A-ha is still writing some fantastic tunes that have balls.  Even on this, their sophomore release, there are a lot of quality tunes (with the exception of that silly Whales song.)  I still think they don't get the credit they deserve.  At least their home country gives them kudos.

Only one b-side, but quite a few mixes and a fan mix of I've been losing you.  Quite spectacular.  Picture sleeve isn't anything special.  Just added the single sleeves.