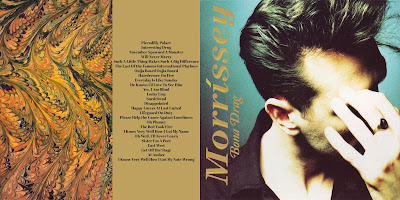 Bona Drag is a wonderful collection of singles released between 1987 and 1989.  Wiki has the best descriptions as to what was on it and why, whole little back story included.  This was my first exposure to Morrissey solo, and it's what kept me with him through good and bad to today.  This collection set the standard.

I reworked this collection as a mix of the original release, the 2010 re-release, some additional random b-sides that had been left off, some demos, and finally some unreleased tracks.  All of them are pretty easy to find, so don't get to worked up about finding that long lost hidden treasure, it isn't here.  But as for treasures, this one abounds.  I can think of six without even looking at the track listing.

I preferred the picture sleeve of the EDILS single over the original Bona Drag release.  I feel the pic totally captures the spirit and the mood that is Morrissey.  His handsome face, yet he raises his hand to hide it.  Classic.  And his hair looks great, too.  As for the back, I just took a standard stock pic of marbleized paper art from the internet, and it worked.