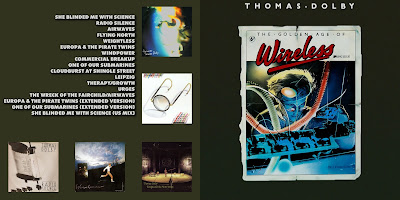 As I write this now, I would have to say that this is #3 in my "Pleasantly Surprised" series.  I bought this some time in the mid-90s, as I was collecting my favorite 80s songs on CD.  I had heard SBMWS, but had never heard the rest of this album.  Once I listened to it, I realized that not only did Blinded Science sound different then the rest of the album, the entire rest of the album was way better than Blinded Science.  In fact, it is my least favorite song on the album.

Now, the b-sides are marginal, and the mixes are mediocre, but the actual album is superb.  It's a true artifact of the 80s that should always be used as an example of what the 80s were.  Best tracks are Flying North, Europa & the Pirate Twins, One Of Our Submarines and Cloudburst at Shingle Street.

Too bad the rest of his work didn't measure up to this one album....

Email ThisBlogThis!Share to TwitterShare to FacebookShare to Pinterest
Labels: 1982, the Golden Age of Wireless, Thomas Dolby