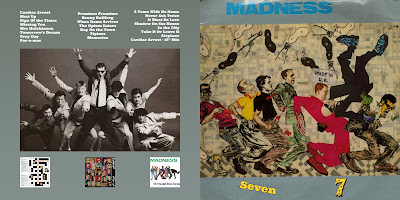 First time I heard these guys, it was Our House, the only song of theirs that I remember hearing on the radio.  Loved it.  Next, I saw them on the Young Ones...  Eh?  What the hell was that?  House of Fun?  Sounded like crap at the time.  It was then that I decided that I hated Ska and Dub.  What a stupid stupid fool I was.

Obviously, one of their best albums, but not my favorite.  You have a lot of good songs on here.  I got the album, the singles, the b-sides, the non-album tracks.  All a pile of mish mash.  It was the arrangement that I liked best.  Hope it works for you.

As for the cover, I have always absolutely loved this cover.  As a comic book fan, the artwork is fascinating, along with the poor layout and design.  When I was making this cover, I wanted to make sure that I left the Made In the UK sticker on there, along with as many creases, ridges, wrinkles and reflections as I could, as it totally adds to the character of the album.

Lots of fun, this one.  Listen to it daily.