Peter Gabriel - End Of A Century and Aughts 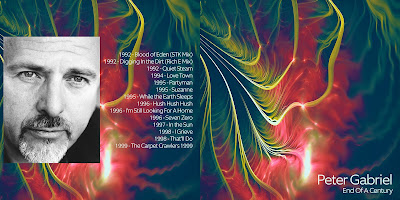 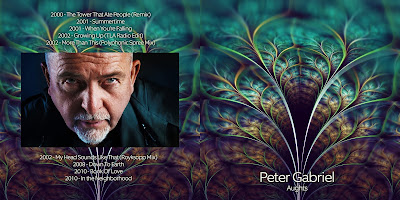 SO, I've already told you the story of how I discovered and fell in love with Peter Gabriel way back in my "So-Courage" post.  As time went by, and lack of new materiel appeared, the inevitable hunt for those guest vocal spots, soundtrack songs, remixes and unreleased tracks start to build up and create lives of their own.

The best way for PG, similar to Robert Smith, was to divide the material into two, and it took an obvious split in 2000, hence then, the titles of each disc.  I personally feel that the "remixes" of the Us tracks at the beginning of the first disc are better than the album tracks.  I really fell in love with them.  There are also a lot of excellent guest vocal tracks that were surprising, once I found them.

The highlight of disc two for me is the Book Of Love cover.  I officially dedicate this song to my wife (and also every time I mention it.)

The covers are standard fractal stock pics from the internet that I thought were pretty.  And the PG pics are your average promo pics.  Simple elements, spectacular results.

I hope you enjoy them, maybe in 3.5 years, I'll have enough material to compile a teens disc.