U2 - Window In the Skies - Compilation 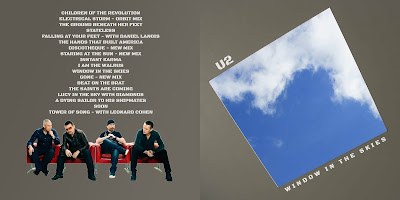 As I said in my previous post, I haven't been much of a fan of U2 since Pop, but they still have some gems out there, especially non-album tracks.  This is a collection of the dozens still out there that either Bono or U2 have done "on the side".

Again, as I said in the Pop post, that album is a gem, a masterpiece.  So, the reworked versions for the Greatest Hits are essential for this set.  Then, you've got their soundtrack songs, their tribute album songs, a few extras, and then SOON.  Where is this song?! I guess for the 360 tour, but nowhere else.

I had always planned on entitling this compilation "Window in the Skies", as it was the only song title on the mix that was innocuous enough to be used.  Googling images using just that phrase, I came across the picture you see above that I used for the comp.  The pic has a story.  Plus, I liked the image as it gives the comp an early 80s feel to it.

U2 - Window In the Skies - Compilation
Posted by Unknown at 8:04 PM

Email ThisBlogThis!Share to TwitterShare to FacebookShare to Pinterest
Labels: Compilation, U2, Window In the Skies