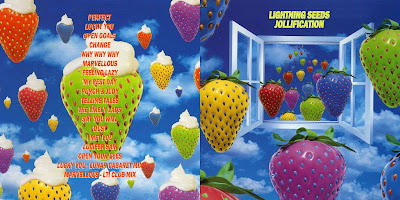 Yes, I have been a Broudie fan since his first album.  What's fun about being a Broudie fan and a Lightning Seeds fan is that none of his stuff is ever released domestically in the United States.  So, back before the internet and the Amazons and the Discogs and Youtubes, you had to go out and hunt to find the material.  You'd pour through music magazines at the book store hoping to see release notes (and praying you could remember them.)  You'd have to become buddies with the record store employees so they would special order stuff, and hold back stuff, and keep an eye open for stuff and let you know if they heard any news.  And that's what it would take.  Not just with Lightning Seeds, but with a lot of groups that I was fond of.  That was the fun.

Now, there's no such thing as not being able to find it.  Discogs has 187 copies of anything you want starting at 13 cents each.  What fun is that?  I can get an entire musical library with demos, b-sides and remixes from groups in about 10 or 15 minutes, depending on where you look and who it is.

But, I digress.  This album was a great one to hunt down all the material from.  Obviously I only put two of the mixes on here, but I could've put more, as they had some good ones.  Ian Broudie is a pop-hook master, and it's a pleasure to listen to anything he has written.  Take a moment and sample this dude, it's pretty good (and very 90s)