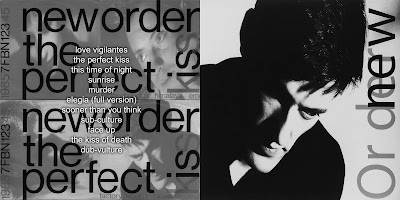 When I try to think of the "New Order sound", this is the album I think of.  It had outgrown the darkness and drone of Movement and PC&L, but hadn't fallen into the Alt Pop trap of Brotherhood.  The only other album close to capturing the "New Order sound" would be Technique, but that is, again, for another time and another post.

The Perfect Kiss captures most of that sound I was talking about.  A wonderful song with an equally incredible video of the band in the studio playing it.  I have to point that out, because NO have always had some really stupid videos.  Not this one.

The first time I heard Elegia was whilst I was watching Pretty In Pink, and I was enamored by it, even before I knew who it was.  I've included the 16 minute version here, as it kicks major ass.  I remember buying the Retro box set so I could get the bonus disc just so I could get this one song.  65.00 song.  Ridiculous, but I'm a sucker for NO and a obsessive completist.

I also prefer this version of Sub-Culture over the single version released on Substance.  This one sounded much more creative, and less polished.  The Substance version had all the joy "studioed" out of it.

I stuck with the same standard track listing, jammed Murder in there and the few mixes that were authentic.  Cover is pretty basic, and used the single picture sleeves for the back.