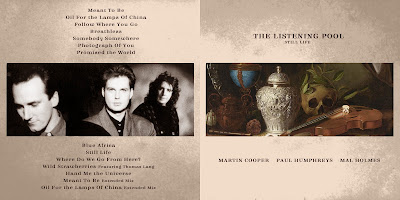 When OMD split, I was heartbroken.  Dreaming had been a swan song of mine from Chicago, and I couldn't think of the eighties without them.  I know the name OMD put 3 more albums out after Dreaming, but we all know it wasn't the same.

You would think that three of the players from OMD would be enough to make a tight and comfortable synthpop album that would be comparable to anything they did in the eighties.  But, as McCluskey proved he couldn't handle it on his own with the OMD moniker, Humphreys and the rest of the boys proved they couldn't swing it without McCluskey.  It was the combination of McCluskey and Humphreys together that made OMD great.  It's too bad it took them almost 20 years to figure that out and try again.

As a one off, stand alone, without any foreknowledge of the members, one might think this was a modest pop album from the late eighties or early nineties, and they wouldn't mind it.  But, given the history of the members, it should have been so much better.

Here are all the tracks, and most of the mixes.  I completely redid the cover, using a new still life painting, and redoing the background and font.  The only legitimate Listening Pool media is the pic of them and the music.

Give it a try, you may like it better than I did.