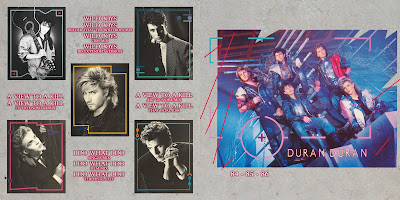 For that little space between 7&tRT, and the Arcadia/Power Station eras of the band, we had a time when they were on the top, and a time when they were their most creative.  I wish they had been able to hold it together, because even though I loved the two sub-groups, I think they had a creative level at that moment that comes once in a lifetime.  Both WB and AVTAK are proof of that.  Absolutely fantastic, creatively primo, cherry on the top.

Yes, yes, the Arena movie was sorta dumb, but it had potential.  Had they slowed down the process and really worked it, they could've made a great film.  Sort of take the WB video and expand it without the cheese.  I loved the concept, the costumes, the dancing and the music.  It's the story that really sorta sucked.

This is shortly after I first fell in love with the band.  I had the folders for school, the stickers, the buttons, the patches, the bandana around the knee.  I had a poster of the image I used for the CD picture sleeve above.  I wish I had it now.  I'd hang it in my bedroom again, but I don't think my wife would let me.

Anyway, I'll post the live album later, with the bonus tracks deleted tracks and all the crowd noise.