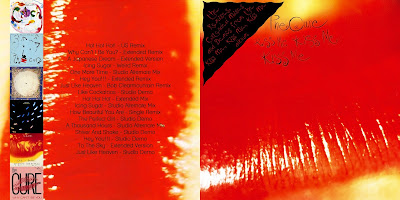 As Fiction, Elektra and Rhino began releasing the Deluxe versions of the Cure albums, I fervently anticipated the arrival of Kiss Me x 3.  This is the album, as I've said in my first Kiss Me x3 post, that was my "life" during 87 and 88.  It was and still is BY FAR my favorite Cure album.  So much of my soul is in all of those songs, and so much of those songs are in my soul.

When they finally released the Deluxe version, I felt a distinct tinge of disappointment, as the bonus disc didn't have any remixes, and there were no new, un-heard-of tracks, and the only additional material was demos of songs we had already heard.  Despite, I still anxiously listened to the bonus material, hoping to find something new and wonderful to pull me back in.  But, there really wasn't.

The bonus disc from Rhino is ultimately a disappointment.  First, in my opinion, as stated in the last couple of posts, I despise live tracks unless they are part of the entire concert.  None of these hit and miss bastards.  The bonus disc had six separate tracks from four different shows.  WHY?!  That's just dumb.  Second, all of the rest of the tracks were "demos" and "guide vocals".  They may as well just have been labeled instrumentals, because that's all they were.

I've arranged here today the missing "third disc" that many have mentioned before.  I've included all of the remixes from the singles and b-sides.  I've included alternate mixes, and then finally the To the Sky remix.  Yes, I've included some of the tracks from the original bonus disc, to flesh this one out, and cut out the unnecessary.  This is what the second disc should have been, in my opinion.

I hope this one fits up snugly against the Album set I posted some time ago.  It completes that Kiss Me era, but I still have a few shows from the Kissing Tour that may yet make it here....


The Kiss Me Remixes
Posted by Unknown at 2:26 PM