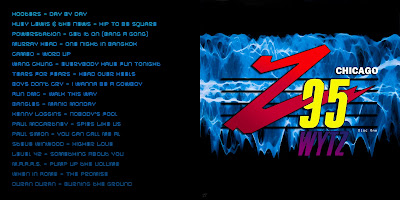 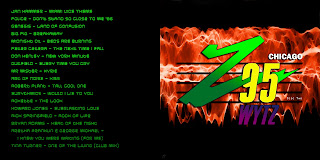 Z95 was the main radio competitor to B96 in Chicago from 1986 to 1991.  When WLS FM 94.7 changed it's name and format in 1986, it was the first station I listened to regularly as a teen, and the only one I remember from Chicago.  I moved from Chicago at the end of 1988, So I had a good 2-3 years of pure 80s pop music from this station.  Unfortunately, the station only lasted 6 years due to inner turmoil with the staff and talent.

I was surprised to find their call-sign in a digital format, and knew that when I made my "80s Favorites" comp, it would fit perfectly as a header to the set.  IF ANYONE lived in Chicago between 1986 and 1991, I'm sure you'll remember this.  The logo is the original logo for the station when it first started.  They later had to change the logo, as they were sued by Zenith for trademark infringement, as the logo looked too similar to theirs.

All this is, is a solid 80s Top 40 compilation, (minus the soul/RnB/Hip Hop) mainly highlighting the time between 1985 and 1989, about the only time I really listened to Top 40.

And that's the end of Compilation week.  Regularly scheduled programming will resume tomorrow!