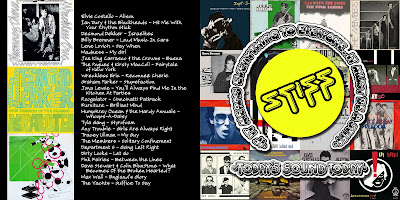 From Discogs -
Stiff Records was created in 1976 by Dave Robinson and Jake Riviera. Initially intending to specialize in "pub rock" by artists such as Ian Dury and Wreckless Eric, the label quickly got caught up in the punk, ska & new wave movements, and helped launch the careers of such artists as Elvis Costello, Madness, The Damned, Nick Lowe, The Pogues and many others.
Ever the keen marketeers, Stiff billed themselves as "The World's Most Flexible Record Label". Other slogans were "We came. We saw. We left." and "If it ain't Stiff it ain't worth a fuck."

From the Ultimate Stiff Discography - 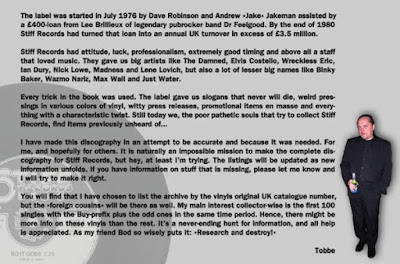 I know that I couldn't even begin to count the number of Stiff Records compilations out there.  I will admit, all of the tracks for my compilation here, were all pulled from other Stiff comps.  I'm sure everyone of us has at least one Stiff comp in our possession, and we've probably listened to hundreds of them.

This is a list of some of the earliest tracks released that I feel really started the birth of the "Alternative" music (aside from John Peel).  This was a label that jumped on that New Wave/Ska/Pub Rock movement that really kickstarted the careers of dozens of our favorite artists, and has given us some of the most memorable single tracks from that era.  Hit Me With Your Rhythm Stick, Loud Music In Cars, You'll Always Find Me In The Kitchen At Parties, Going Left Right, My Girl, the list goes on and on.

I could have made a comprehensive list covering all of the tracks from the very first, to the very last 80s era single.  But, I just grabbed some of my favorites.  In fact, there are still some other favorites that didn't make this cut, so there will be a Volume Two later on down the road. Maybe my next comp week.