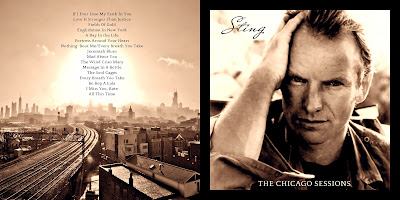 On the coat tails of the Oasis Demos, I'm posting Sting's awesome Chicago Sessions.  Lord only knows what they were recorded for, or why they were recorded.  All of the sources I've researched just state that they were soundboard recordings.  So, my guess would be it was some sort of show, although there aren't any crowd noises, if that's the case.

You'll find this collection all over the internet.  I am, by far, not the first to post this.  You could probably download these tracks from two dozen different sites, or more.  BUT, I am the only one with such a cool cover that will fit in nicely with all the other Sting albums available.  Sting has a picture of himself on all of his albums, with the exception of Soul Cages.  So, I had to find a good pic circa 91-93 that was in good quality/high resolution, and also not already used.  Trust me, it was hard to find.  But, the pics of Chicago were abundant, and I think I found a great one for the back.

Got this one back when I lived in Kansas City, during my "great depression".  It was a soul-soother.  I got it back when there were still these bootleggers who sold CDs on the web, and I got this one from this site called DMD Digital World. I also purchased three A-ha collections, an INXS live CD, and about five different Duran2 concerts.  I bet I spent 300 bucks with this guy for CD-R burns and laser printed cut out covers.  Stupid.  Now I can get all the material and more, and create my own covers, all for free.  Imagine the things I could have spent my money on instead of some cheap burns and printer paper.  Made in the Czech Republic my ass.

Hopefully, some of you don't have this yet.  If you do, I'm sorry.  Maybe next time.

Email ThisBlogThis!Share to TwitterShare to FacebookShare to Pinterest
Labels: 1991, 1993, Sting