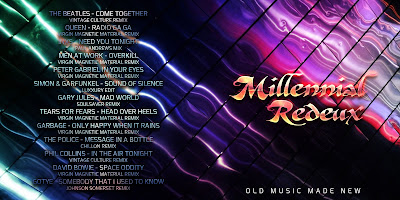 One of the prime examples of all of this is music.  I think that most of you are aware that I do have a liking of music, right?  All sorts of music, from the 1950s to today.  Obviously, I do focus most of my attention on the 80s, though, followed by the 90s.  The rest of the decades are hit and miss.  But, for the most part, it is older music.  Music that can be dated, music that can pigeon-hole me in that "I remember when" category of old people.  Yes, I'm getting old.  I want to say so what, but it still stings when I remember that I am not immortal, and life is fleeting.  But, I don't want my children to see me as "old".  At least, not yet.

So, we're driving in the car, and I've got one of my CDs in and it's turned up loud.  My son rolls up the windows, and when we come to the stop light, he turns the music down.  What's the problem?  He doesn't want anyone to hear us listening to "old music".  Wow.  I'm also not allowed to dance in the car when he's with me, either.  I guess I'm too "old" to do that sort of stuff.

I understand that kids will always see their parents like that.  It's just the nature of the beast.  At first I was a little hurt by it.  Maybe a tad offended.  But, now I just laugh it off, tease him a bit, and try to connect with him to show him I'm not as old as he might think.

Ever since I started listening to music, I've always been fascinated with remixes.  The very first remix I ever heard was the extended remix to The Reflex.  I was in love from that point on.  If I ever heard a song, I'd instantly run to the record store to see if they made an extended release of it,  I might like it more, I liked the length, I enjoyed playing versions that others hadn't heard, etc.  To me, remixes (and b-sides) are key.  That is what attracts me.  An album is good, it's the extras that really sweeten the pot.  And lately, with the incredible software available to work with at home, some really talented people are able to further mix music, especially music that has never had that extra treatment....

Play this at a party, play it in the car, whatever.  You play this music, you become hip and mod.  You are the shindizzle.  You are the BOMB dot COM. And you still get to listen to your oldies at the same time. All of these songs are at least 20 years old, with the exception of the Gotye track.  Yet, the tracks were all remixed within the last five years.  Most of these versions are fan-made.  All of them are fantastic.

Stand out tracks are Queen, Peter Gabriel, Simon & Garfunkel, Tears For Fears, David Bowie and the Gotye track.  I really like the Queen and Gotye ones.  When you play the Queen one, turn it up as loud as you can, and drop the bass on the equalizer as low as it will go.  You'll shake your foundations.

A fresh look at some older material.  It may make you feel younger, or it might make you feel older.  Regardless of how it makes you feel, you'll enjoy doing it.