Covering the Beatles - Volume One 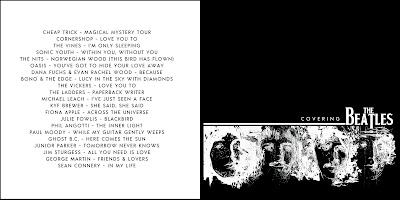 My Dad is the one who introduced me to the Beatles.  I grew up listening to the Beatles Red and Blue compilations from my earliest memories.  My favorite tracks were the ones released between 1965 and 1969.  I strongly preferred the "psychedelic" side to their music, I found it more creative than the rest.  I never got into the early 60s stuff, even though it was good, simply because it sounded a lot like all the rest of the bands from that era, and to me it got repetitive.  And, the stuff from the White Album on seemed a little too stoner hippy type music, a more Classic Rock/Prog Rock sound of sorts.  Just didn't dig it.

In the late 90s I really got into their work, purchasing all of their albums as they were remastered and released, memorizing every track.  Every time I listen to them, I am constantly reminded at what master songwriters they were, and I marvel at their creativity.  Their body of work can be matched by no other, in my opinion.  Not the Stones, not Floyd, not Led Zepplin, not U2, NOBODY.  There are bands and songs that I like better, but from an educated and learned position on music, I thoroughly respect and admire all that they did while they were together.

I've read that neither Paul or John were satisfied with the end results on their songs.  They both felt (especially John) that a lot of their most well-recognized hits were never fully realized.  Never finished as they should have been in their eyes.  Sometimes, they've even admitted that other artists were able to perform the songs better than them (hard to believe, really).  I have to admit, that over the years, I have heard versions of their songs that I find breathtaking.  Sometimes there are artists who can really reach into the song and pull out the inner beauty in ways like no other.  Sometimes, there are artists that play a perfect homage to the Beatles, giving heartfelt versions that honor the work the Fab Four did together.

After I got the "Across the Universe" soundtrack, which is magnificent in itself, I began a long an arduous search to find as many covers and the best covers of Beatles tunes.  With 300-400 different cover versions of their songs that I find acceptable, I have barely scratched the surface (but there's a lot of shit out there, too)  I've been able to pull together some of my favorites into one set.  This "Covering the Beatles" though, is only Volume One.  I will eventually be compiling Volume Two and Volume Three, for sure, and maybe more as I find more versions out there.

All of these songs represent my favorites at this point in time.  Some more than others, obviously, but all of them positively permanent renditions in my eyes (ears?) Some of my favorite highlights on this specific set...

-  The opening stanza of Cheap Trick's MMT.
-  Cornershop and the Vickers are both covering the same song on this comp, but the versions are so dramatically different, I had to put them both on, if anything, to compare to one another.  They both kick ass.
-  U2's version of LItSWD from Across the Universe.  Not the best film, but an excellent soundtrack version.
-  The Ladders' Paperback Writer, an Italian cover band who have done a spot-on version with their own little flare.  I'll be posting more of these guys in February.
-  Julie Fowlis' version of Blackbird sung mostly in Gaelic.
-  Paul Moody's version of WMGGW.  A youngster who played and recorded this version with his computer in his bedroom.  YOU WILL BE ASTONISHED.  (Find his videos on Youtube)
-  And Sean Connery's version of In My Life.  This version will be played at my funeral when I die.  I've insisted, and my wife and children have promised.


Of all the comps I'm doing this week, this one is probably my favorite.  It was also the most fun AND the most difficult to assemble.  I hope you enjoy it as much as I do.


Covering the Beatles V1
Posted by Unknown at 4:18 PM