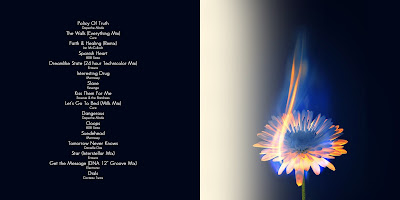 This is the track listing from the very first time I sat down to make a real mixtape.  I was probably 18 or 19, and had dabbled with taping my favorite songs off of the radio or other tapes.  But those other tapes were cobbled together with no rhyme or reason, just a hodge podge of miscellaneous tracks that I had put onto tape so I could listen to them in my Walkman when I was out.  I mean, you can't very well take a record player out with you.

At the time I made this tape, you can look at the track listing and see that a lot of fantastic material had been released pretty much all at once.  I had my favorite tracks from every album release by these artists, and I wanted to listen to them all, without having to haul 10-12 tapes/CDs around with me, trading them out as each track ended.  So, I pulled my favorites, and sat listening to them, then arranging them in a way that sounded good.  Back then, you didn't have any music on your computer (if you even had a computer), so it wasn't like you could load the tracks in your WinAmp and hit shuffle.  No, this was a very careful and deliberate process that took a while for me to come up with the right arrangement.

I made the tape, though, and used it in my car, listened to it while I mowed the yard, and played it when I went to friends' houses.  It was pretty good.

I've rearranged some of the tracks as years have gone by - only added the Ian McCulloch about 1998 and traded the Cocteau Twins track from Heaven Or Las Vegas to Dials (and then plugged it on the end of the mix).  But, as for the rest, this is the same setup I made back in 1990-91.  And, I still listen to it about every other month or so, to this day.  To me, this comp represents the best these groups had to offer, at the peak of their popularity.  Every song is quintessential to what these groups/artists are.  They are all lush, romantic, and full of emotion.  They are perfectly written, and perfectly performed.

To this day, I still don't have a name for this collection.  It's still, to this very moment, Untitled.  But, to me, that might be the best way of describing it, too.


Untitled
Posted by Unknown at 4:06 PM