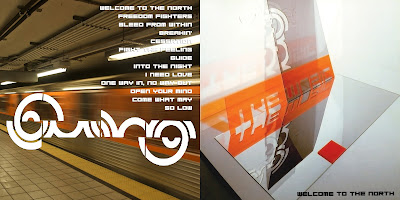 I may ramble a bit here.  I'm loopy on cold medicine, and still feel like a stanky shithole after a chilifest.  So, bare with me. I mean, BEAR with me.  (What a horrendous mental image...)

Welcome To the North is an absolute stomper from the "Brit Rock Invasion" that occurred from 2004 to 2006.  I bought this one the same time I bought Bloc Party, Kasabian, Kaiser Chiefs, Art Brut, Futureheads and the Arctic Monkeys (not to mention the Brit Rock wanna-bes The Killers & The Bravery.)  This one stood out from the others in that along with it's strong Brit Rock sound, it also had Hard Rock and Classic Rock intonations as well.  I almost thought they sounded a little like a British Jane's Addiction.

It's unfortunate that they only released three albums.  At barely 20 years of age when they released this second album, they had a lifetime of great music ahead of them.  But, alas, t'was not to be.  One more album after this, and a final non-album single that was supposed to be for their fourth, and they were done.  I feel they had the potential to do so much more.  Harvey alludes to drugs and alcohol, which tends to be the reasons behind most artist failures.

At least we get some more Harvey in the D.O.T. and The Six, but they don't compare to the awesomeness of this group and THIS album.  The first five songs are the strongest, and most memorable, but it's a solid banger all the way through.  You will enjoy or my name isn't Chaos.

Email ThisBlogThis!Share to TwitterShare to FacebookShare to Pinterest
Labels: 2004, The Music, Welcome To the North