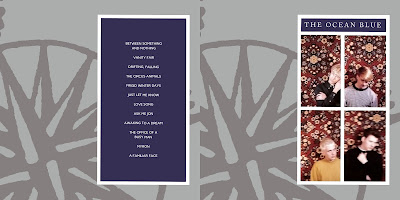 I feel like I'm halfway cheating you guys on this post, almost feel like I'm cheating myself.  A fellow blogger posted this album several weeks ago, and now I am.  This is one of those albums that I had specifically saved for this week, though.

It is a stellar album, awesome songwriting and production, and one that takes me back to my High School days, right before graduation.  I bought this one during the winter months of early 1990.  I was planning for going into the Air Force, yet still wanting to be a hip Post Punker and classy at the same time.  This album helped me fill that role.

It's amazing that as British as this album sounds, they are from Pennsylvania.  Cool.  I didn't think Americans, especially at that time, could even sound so sheik.  My favorite songs are, in order of appearance, Between Something and Nothing, Vanity Fair, Ask Me Jon and Myron.  Myron is probably my favorite.

I know that somewhere, out there, there is a demo of this album, along with the Laugh Tour EP, which may or may not have material on it that might be pertinent to this album.  I cannot find the Demo album, nor the EP.  All I have, and can find, is this album.  Hence, there is Nothing Extra, Nothing More.

You probably already have this, but I'll post a link anyway....