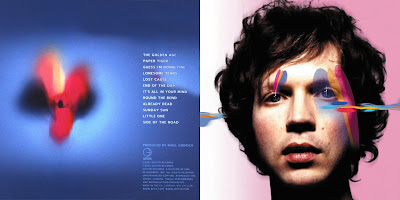 I was working as the Senior Managing Chef for an Italian restaurant when this album came out in 2002.  I'd be to work by 8am and spend my morning prepping and preparing for the restaurant to open, and the sous chefs would want to listen to the local hard rock radio station with their slap-happy "shock jocks".  It was annoying as all get out, as my brain that early was still waking up, and preparing for the mental rigors of the day.  Last thing I need is obnoxious music and infantile conversation (if you could call it that.)

So, when this puppy came out, I had listened to it a little, only a couple tracks, and I thought it would be perfect to take to work in the morning, commandeer the radio, and play some music with style and class.  I put this disc in and played it from beginning to end, non-stop, and it was fucking glorious.  Beck ala Gordon Lightfoot (you better believe it.)  Fantastically written, fantastically performed and fantastically arranged and produced.  I was in heaven.  Several times, I'd have to stop and close my eyes and just aurally ingest the music as it played and flowed.  By far, Beck's best album, hands down.

Seconds after the album ended, probably 4 or 5 seconds at most, one of the sous chefs flicked the obnoxious radio back on, and he turned to me, waving his tongs in my face like pointing a finger "Don't ever play that shit in here again, Puto."  And we all laughed.  Sometimes, when everyone else is sitting around and eating shit sandwiches, then you got to sit around and eat shit sandwiches, too.

But, I still played it again the next day, anyway.


One more post to go, folks.  And then, some parting words.  See you tomorrow.
Posted by Unknown at 9:57 PM