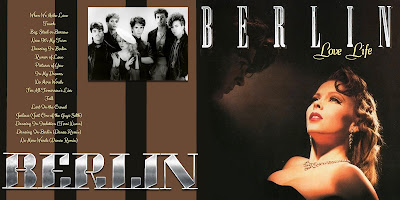 This has always been a "sexy" group in my eyes.  Not just the albums per se, but the entire group, their material and their career.  It surprises me, looking at their history and career, that Crawford and Dunn were never romantically involved, as it seemed to be a fitting scenario for a love-locked couple.  I mean, look at the cover to this album!

This will probably be the only Berlin album that I post, as it's my favorite.  Moving into the Count Three sessions, and I lost interest.  They had drifted into the commercialized Pop sound the Top Gun song was the last straw.  By then, American New Wave bands were dying anyway, and Pop music was drifting into the Wang Chung/Johnny Hates Jazz/Cutting Crew era of sound.

The Berlin logo I put on the back of the cover is one from one of their singles from the album.  I love the typeface, and I'm even thinking of making a font of it.  BUT, now that I look at it, I'm not sure if I like the steel texture I gave it, as it doesn't really fit the album.  I also feel, looking at it now, that although the light and dark brown lines on the back match the colors on the front, they make the back cover look a little too much like a poop color.  But, it is what it is, now.  Maybe when I run out of albums to do, or I have a "REVISIT WEEK", I can come back and redo this one....

And tomorrow starts the "Already Deluxed Week"....  I'll see you then!
Posted by Unknown at 4:00 PM