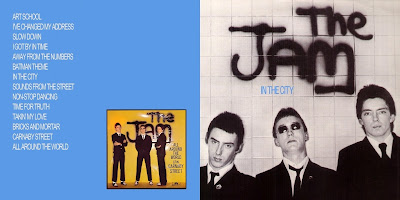 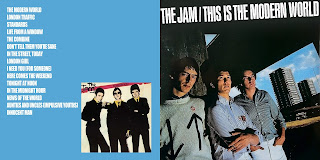 Sorry for missing my post, yesterday.  I've had this horrible head cold and it's seeped down into my lungs.  I came home from work last night and collapsed on the couch, and fell asleep.  I got up about 11pm just to take some medicine and take my clothes off, and then went to bed.  I'm feeling better today, but I'm still in bad shape.  So, because I missed yesterday, and because these albums are so short (and because I had already planned it this way ;) ) I am posting the first two albums by our beloved Jam.

I didn't get into the Jam until I got a two-fer album from Collector's Choice music about 15 years ago.  Back then, as the internet was just becoming popular, I started exploring different genres of music as my tastes developed.  I liked Punk, but I had always been very particular about which bands I listened to.  I had never heard The Jam before then, that I remember, so I thought I'd give it a shot.  Two albums for the price of one sounded good.

As many of you already know, getting two Jam albums for the price of one is an outright steal, as these albums are like gold.  I fell in love with them almost instantly.  Every song is full of pophooks and full of energy.  Weller's voice, instantly recognizable, fits the music perfectly.  It's not whiny and nasally, and he doesn't have to scream.  He actually sings.  And you can tell, that he and the band are really having a lot of fun.

There were only a few singles from these albums, and just a couple b-sides.  I also put the non-album single All Around the World on there, too, just to give it a home.  The covers were cut-and-dried, straight forward covers.  Nothing special.

Email ThisBlogThis!Share to TwitterShare to FacebookShare to Pinterest
Labels: 1977, In the City, The Jam, This Is the Modern World