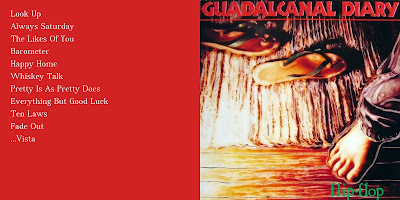 I love this album.  You wouldn't think so, with the way I kept getting rid of it, but I kept missing it and had to have it back.  I think it's because I was updating my music a lot, and I kept thinking that American College Rock was for shit.  But, not this album.  Not then, not now, not ever.  Just when I think it's time to get rid of it, now, I take it out and play it, and I know that I could never part with it.

If you have not heard of Guadalcanal Diary, I'll give you some reference points.  Think REM, Pixies, Husker Du and the Smithereens.  They run along that vein.  The vocals though, definitely remind me of Michael Stipe, but with their own quality.  Musically, it's straight forward College Rock, with measured dose of Country twang, and a lot of Pop hooks.  Nearly every song is one you can sing along with and enjoy (except Whiskey Talk, that's the worst song on the album.)

I first heard this group when I saw their video on MTV for Always Saturday.  It's a great song.  I was getting big into the above mentioned bands, and this fell right in line with them.  Plus, I loved the Elecktra label spines at the time with the bold, black Impact typeface that every one of their cassettes had.  They looked cool.  After the first listen, I knew the album was a winner.  Why I continued to sell it back to the music store is still a mystery to me.

BUT, no b-sides mixes or unreleased tracks.  Not even a demo.  If you find any, send them my way...