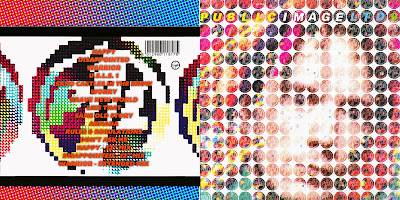 The first time I saw the PiL logo, it was a sticker on the back window of a mid-70s volkswagen bug in my High School parking lot.  I always thought the logo was really cool and a great design.  The guy who owned the bug was a really scurvy looking dude with a long flop hairdo and a big nose.  It took me a while to put it together, but when I did, I picked up a few of their 45s at the record store to give them a try.  This was the first album of theirs that I actually purchased, though.

I think that despite the SP connection, PiL are an acquired taste that either grows on you or doesn't.  I can only listen to about 3 of their albums, this being one of them, because I can't tell if they're being experimental, or attempting to sound somewhat talentless, or if they really are without talent.  Yes, the image is cool, and I know that Malcolm McLaren did a lot of promoting of the group as an art piece, but at times, a lot of times, the songs are just hard to listen to.

I think this album is pretty good, though.  I made out with a girl to it, and I still think of that occasion when I here these tunes.  It's one of those discs that I've had in my collection since I started collecting CDs, and it's not going anywhere.  I've lost discs, worn discs out and repurchased them, sold them back to the record stores, garage sales and pawn shops.  But, I will never part with this one.  It's a fucking original.

Anyway, popped on the only b-side and 3 mixes.  Good enough.