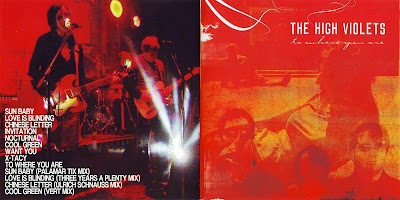 You would think (I would think) that I would have a problem with a Post Punk band coming from the United States.  I mean, all my life I've considered Post Punk to be a European if not strictly British movement.  When I think Post Punk, I think New Order, Echo & the Bunny Men, Cure, Smiths, Psychedelic Furs and Siouxsie.  Not a local band from Portland, Oregon. But, here I am posting a release that I feel is comparable to all of them.

If you are a fan of Cocteau Twins, Lush, Curve or the Sundays, then you are definitely going to find something of interest here.  The first time I heard it, I instantly fell in love with them.  Fortunately, I didn't know they were from Oregon, or I may have passed them by.  Not that I have something against American bands, just that my tastes are a tad European.  When I think American music, I think Hard Rock, R&B, Rap, Country and teeny-bopper Pop shit.  Anything considered "alternative" by American artists is usually full of unjustified angst, which I find to be disgusting considering most of them should move out of their parents basements and get a job.

I keep slipping back onto that soapbox, sorry.

The entire album is full of great music that sounds very "early-90s", but with a modern twist.  The vocals are heavenly, and the guitar-playing would impress Robin Guthrie.  The melodies are full of pop hooks, and you'll find yourself humming along by the third playing.  Very catchy.

I included the remixes from the tracks that were on the album, which they had released on a disc in 2007.  They didn't release any singles, so there's no b-sides.  But, the mixes make up for it.  It's great stuff, you should like it if you like Harriet, Toni or Ms Fraser.

Unfortunately, they've only released two albums since then, and I didn't find them to be very interesting.  But, they did have an EP called 44 Down from 2002 that was pretty good.  You may check that one out as well....

Email ThisBlogThis!Share to TwitterShare to FacebookShare to Pinterest
Labels: 2006, High Violets, To Where You Are