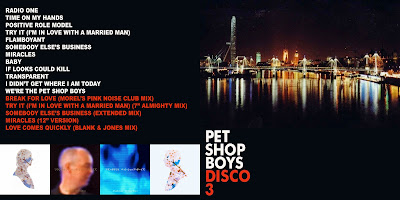 Disco 3 was released the year after Release and two years after the Break 4 Love single. It was also released before PopArt, the Best of... Collection.  I had a great time listening to this one.  BUT....

I didn't like the fact that when they released Disco 3, they had these great new tracks on there, but then a bunch of mixes from Release.  Well, you know me.  That couldn't be.  The mixes from Release need to go to Release.  So, I've switched up D3 to make it it's own album.  Between the singles released for PopArt and the new tracks from the original D3, there were plenty to fill it up.

Track 00 is a Radio One Jingle that opens this collection PERFECTLY.

Tracks 04 and 06 were the singles from PopArt

Tracks 12 through 16 were some of the remixes from the singles, including the Break 4 Love single.

Plenty for a fabulous PSB set that is lightyears better than the original.  Yes, there were some great mixes from the Release singles, but we'll get to those when I do the Release album.

And again, a great collection of tunes to listen to at about 1:30am in the morning....