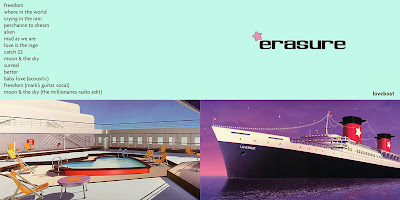 It's always mystified me why Loveboat was so unpopular?  The two singles were just two of the more than excellent songs on this great album.  I was living in Kansas City at the time, and I remember loving it because it felt cold and sterile, yet beautiful and comforting at the same time.  Of course, when I was living in KC, and this album came out, I didn't get it until mid-December, so it was very cold out.  And then I listened to it through the entire winter.  I almost like the fact that it wasn't so popular, as it made it seem like it was more personal.

Regardless, I liked it.  I liked it better than "Erasure", Other Peoples Songs, Nightbird and Union Street, so it can't be that bad.  In fact, of the 16 albums that Erasure has released, I would honestly  put this as #7.  Solid.