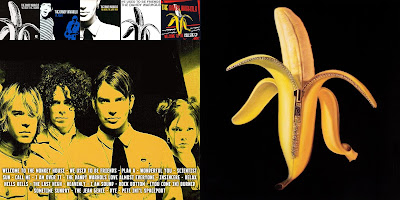 I'm gonna attribute my love for this album to the Duran2 reference primarily.  I think, after listening to the "original" version from 2009, that Nick Rhodes reworking really improved the groundwork the Warhols had laid.  Yes, NR's version was a departure from what the group had originally intended, but at the time, NR had taken his 20+ years of experience and took a mediocre album and turned it into a pophook extravaganza.

I got this album when my first son was 3 years old and played it continuously.  It got so my son started requesting the "banana songs" and we would dance and sing together while We Used to be Friends was playing loudly in the living room.  Now he only listens to Christian Inspirational Worship music, the likes of Tenth Avenue North, so I don't know where I went wrong, there....  Maybe it's his form of rebellion....

All of the b-sides are here, and it is obvious that NR hadn't worked with them.  With the exception of three of the cover songs, the rest of the b-sides are crap.  But, their version of Hells Bells really kicks ass.  Turn that MFer UP.  Best songs on the album are, We Used To Be Friends, Plan A, Call Me, Relax, Hells Bells, The Last High and Heavenly.  The Jean Genie cover really sucks, and it sounds like a demo or session.

Anyway, listen away, it's good for a party weekend or even jamming out while you're cleaning the kitchen on a Saturday morning.  Good Stuff, Lots of Fun, and Quality Listening!!!!!!

Email ThisBlogThis!Share to TwitterShare to FacebookShare to Pinterest
Labels: 2003, Dandy Warhols, Welcome To the Monkey House