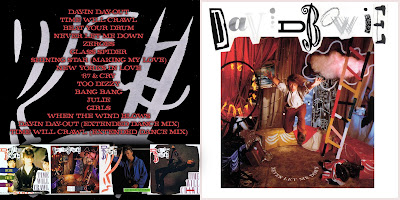 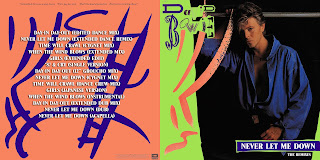 Now, most people would consider that a bad thing.  But, it's what kept Bowie alive for 45 years in the music scene before he died.  I will admit he didn't break any musical barriers with revolutionary work, but he kept inviting new people to listen to the work he did, and it wasn't crap work at that.

I didn't start listening to Bowie until Tin Machine.  All I knew about him before that was that horrid single he did with Mick Jagger and that embarrassing video that accompanied it.  I enjoyed Tin Machine, and liked Black Tie, White Noise even better.  But, working my way backward, I found that I was very comfortable with Never Let Me Down, as it captured my favorite (and I think the best) part of the 80s.  It was a time of discovery for me, and this music exemplified that.  It reminded me of my Sophomore and Junior years in High School in Chicago, and my discovery of life beyond what my parents taught me.  To coin a cliche, "a coming of age" moment.

All of the singles were perfect 80s hits.  Not that they were so much popular, but, as I said, they were SO 80s.  The album tracks were great, and he was able to do a little more of what made Bowie BOWIE.  And the b-sides were prime examples of Bowie in general.  You could line them up with his 70s material without skipping a beat.

I'm thinking of making an 80s compilation of remixes, and you  can be sure that you'll find at least one of these tracks on it.

I'm pretty sure I got all of the b-sides here, let me know if I missed any.  AND, if anyone knows or has any demos or outtakes from these sessions, I'd love to have them....

Email ThisBlogThis!Share to TwitterShare to FacebookShare to Pinterest
Labels: 1987, David Bowie, Never Let Me Down