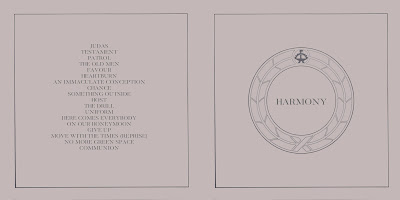 The Wake was a Scottish group that I knew absolutely nothing about until I started exploring Factory Records back catalogue.  The started around the same time as Joy Division was shifting to New Order.  They have that same stark, minimalist Post Punk/Gothic sound that was the basis for New Order's first album.  Of course, Movement is 100x better, but this is another take on the same theme, with some interesting melodies and instrumentation.

Unfortunately, I could not find a digital copy of this, so I had to rip it from Youtube and Mp3pm.  The quality is better than you'd expect, but it's not the same as a direct rip.  It was released on CD in 2001, and should be fairly easy to find.  But, you won't have all the wonderful tracks that I've added.

Email ThisBlogThis!Share to TwitterShare to FacebookShare to Pinterest
Labels: 1982, Harmony, The Wake