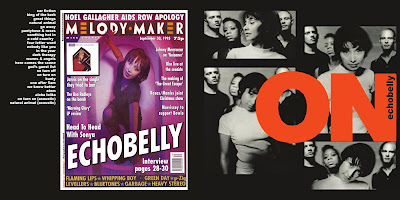 A wonderful album, I was originally drawn to this album because Debbie Smith was a member of the group.  A big fan of Curve, I thought Debbie would bring along a little magic with her.  Talented as she is, Echobelly remained Echobelly and Curve remained Curve.  It would appear that she was little more than a session musician.  Tell me I'm wrong.  I also had a crush on Sonja, as she is stunning.  What a cutie.

The album starts very strong and is fantastic through about the first 5 songs.  Then, it drops off and the rest of the songs are slightly better than mediocre, a little better than good, but not great.  The b-sides tacked on at the end are pretty good, too.

Looking at this Melody Maker cover, I specifically remember the Oasis/Blur controversy, and shocked that Noel even gave voice to something like he did.  Think what he wants, you just don't say shit like that.  Needless to say, I still love his work.  Hope his attitude toward the subject has changed, though.

So, no more of me crying the fuckin' blues.  I'm not "alright", but the edge has been dulled, and I move into manage mode, now.  I want to thank those of you who took time to comment on my issues, and hope you all don't think I'm too crazy.

Email ThisBlogThis!Share to TwitterShare to FacebookShare to Pinterest
Labels: 1995, Echobelly, ON