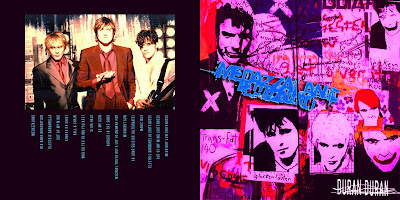 This was a very unique and interesting time in the history of what was called "Duran Duran".  Yes, it had two of the original members, but it was closer in membership to Arcadia than Duran2, and the sound was way the fuck off.  Way off.

I remember I was traveling for a restaurant chain between locations as a trouble shooter.  I would go to various chain locations and "fix" their problems and move on to the next local.  I was in Ames Iowa when this one came out.  I remember getting the CD single from EB and being somewhat baffled.  Shortly after, I got the album, and took several months memorizing and analyzing it from the various first note to the last beat, every second of every song.

At this time, the USA was knee deep in the remnants of grunge, and hip deep in this American "Alternative" music with bands that all sounded the same.  You also had Electronica exploding all over the place, and RnB Hip Hop everywhere.  Where was Duran2 to go?  What were they to do?  The music scene at the time was why we got an album like Medazzaland.  They really didn't know who they were and were starting to imitate the music of the time, rather than defining it, like they did in the eighties.

From the album proper, only two of the songs are worthless.  The very first track, Medazzaland, and the last track, Undergoing Treatment.  Can't stand either one of those.  As for the rest of the songs on the album, they are all very solid, well written and well produced.  Big Bang Generation and Electric Barbarella stand out as two of the better "fast" or "non-ballad" tracks.  As for the ballads, you've got Out Of My Mind, Michael, Silva Halo, Midnight Sun and So Long Suicide that I really like.  All in all, every song has it's own qualities that make it good.

As for the cover art, I vote this one as the WORST Duran2 cover ever, followed closely by Paper Gods.  The artwork is atrocious.  Absolutely appalling.  Even though I am including material for two discs, I've only made a cover for the first main disc.  I didn't have enough artwork that was reasonable to even make a cover for the second disc.  Plus, the second disc is really a mish-mash of tracks left over from the main album.  Some of them weren't good enough to put on the first album, like P.L.You and Plastic Girl.  Most of the mixes really didn't mix well together, and really didn't match the style of the rest of the album.  The demos and alternates are MEH, with the exception of So Long Suicide, which I liked better than the original.  And then you have Niles and Simon with Do That Dance.  O.  M.  G.  No way that was going on the main disc.  It's almost a joke.

The Bonus Material
Posted by Unknown at 8:02 PM