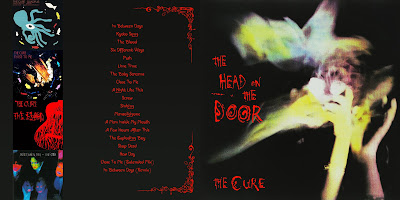 So with Disintegration being my favorite Cure album, followed by Kiss Me x 3, then Three Imaginary Boys...  I guess HOtD is my 4th favorite Cure album.  It would probably slip a place or two if I added in Mixed Up and Japanese Whispers, but those technically aren't albums.  As it is, when looking at the amount of work RS has released, being in 4th really isn't so bad.  Better than being 4:13 Dream, which came in dead-fucking last on my list.

Best songs on the album are In Between Days and Push, two absolute pop hook songs, and  A Night Like This.  The opening guitar cords on Push awaken younger feelings and times, that almost seem like long lost friends coming back to visit.  There's always a sense of forlorn and loss when I listen to this album, and I don't know why.  Maybe because I loved being a teen, and now that's all gone......

Worst song on the album is Close To Me.  Don't know why I feel this way, but I can't stand it.  Don't like it now, didn't like it then, won't like it tomorrow, either.

I redid this "Deluxe" version, as the official version had too many live tracks and home demos on the bonus disc, and not a single remix or b-side.  Is he serious?!  Really?  Come on, Robert.  Half that crap no one really cares about, and you didn't even add anything extra on the album disc, either.  So, I added the b-sides and mixes, and a few of the STUDIO demos, to make it more worthwhile.  What I have here is definitely more in line with what I wanted/expected from a deluxe version.

The two demos I included - Lime Time and Mansolidgone - are definitely period, and would have sounded good on the album.  Obviously, Lime Time (fabulous name) shared lyrics with Inbetween Days and seemed a tad too cheerful for the actual album.  Mansolidgone (stupid name) was also a little too cheerful for the album, but also could have changed the face of the album all together.  It sounds like a precursor to a Kiss Me track, reminding me a little of Hot x 3 and WCIBY?  Both are great demos, just wish the lyrics and melodies had been filled out a little bit more.  But, that's why they're demos, I guess.

Email ThisBlogThis!Share to TwitterShare to FacebookShare to Pinterest
Labels: 1985, Cure, Head On the Door