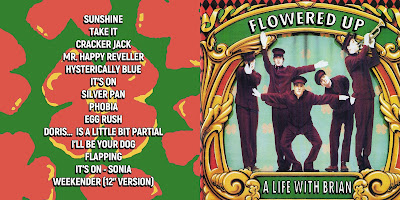 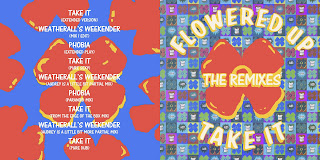 So, another little slice of mediocre Madchester that I felt the need to post.  An okay listen, not the greatest. A sign of the times that labels were willing to sign about any band who sounded like the Manchester sound.  There were good, and there were bad, but there were a shit-ton in the middle.  Just sort of there.

As it is, Flowered Up was mainly known for their spectacular hit Weekender, a mega track that personally lasted way too long.  A good song, just went on for fucking ever.  I mean, has anybody released an edited version of this that's less than 6 minutes long?  I'd be apt to listen to that one more than dragging on like it does.

With all my bitching, it makes you wonder why I'm even posting this.  I had a long, tough day.  Coming home, I had a flat tire as I left work, so I had to change that.  Then pick up the boys as my wife is still out of town.  Now, I've got to make some supper, and put them to bed before I can even do anything else.  At least one of them is 15, so I don't have to put him to bed, he can do that himself.  It's the 5-year-old bastard that's going to be a handful for me.  He's usually my wife's responsibility.

Tomorrow I get to sleep in, though, and I'll make some more covers, so I should get some energy back.  And the wife will be home tomorrow night.  Hooray!  Maybe I'll "get some."

Remixes
Posted by Unknown at 4:35 PM

Email ThisBlogThis!Share to TwitterShare to FacebookShare to Pinterest
Labels: 1992, A Life With Brian, Flowered Up, Weekender