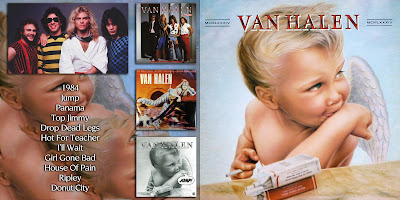 So, my fourth most favorite Hard Rock album of all time.  1984.  Fantastic.  I saw it in the window of Pickles Records in the mall when I was 12.  I remember the shock of seeing an ANGEL of all things SMOKING CIGARETTES.  How sacrilegious!  That is like playing with the devil and going to hell!  Bad people.

But, I watched the videos on MTV and enjoying them.  I remember not really knowing what Hot For Teacher really meant, and then when I found out, I again was shocked.  These guys were the baddest of the bad, from my limited perspective.

Now, I think that this is Van Halen's best album ever, and also an album they could never and will never ascend to again.  This is their ultimate high, and they never made it back again, IMHO.  As I said in my previous post, I love Sammy Hagar, but the magic that the original four had was something special, and Hagar just didn't really mesh as well as Dave did.  Yeah, VH was good, but not as good as 1984.  Having already written my DLR post, I have to return to it and say now that I feel DLR is the one who ruined VH.  Again with his gynormous ego.

But, as for 1984, I think it was a standard for all other Metal albums to follow.

What's awesome, is that I was able to find two demos for this album - Ripley and Donut City.  They aren't bad, but they really don't fit with the rest of the album.  Regardless, I included them.  Hope you enjoy.

Only two days left, guys.  Good or bad, I'm almost done with Metal and we're back to normal....