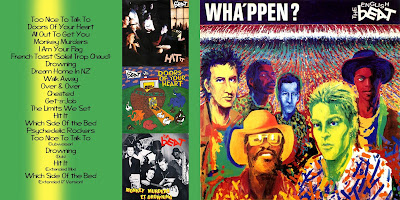 So, for the longest time, I judged The Beat by Mirror In the Bathroom, and chose not to listen to them.  Then by some freak chance, I happened to hear Too Nice To Talk To, and I wondered "Where have these guys been my whole life?"

Why is it, that a lot of bands out there get pigeon-holed by one or two songs, and no one can get past it?  As per my example, I heard one song, and it tarnished my impression of the band.  Our House by Madness?  Come On Eileen? Pretty In Pink? And even in some cases Rio by D2?  There far too many bands out there that are so much more than the one hit the low-information fans remember them for.  And, the English Beat is a prime example.

I didn't know ska when this stuff came out, and then there was that ska revival in the late 90s that turned me off to it.  I didn't actually listen to this music until 2008 or 2009.  I feel like such an amateur.  But, now I listen to it on a regular basis.  And, this album is one of them.

Great stuff, all of it.  My favorites are Too Nice To Talk To, Cheated, Psychedelic Rockers and Which Side of the Bed.  They had a bunch of non-album singles come out at the same time, so I've included them (and their b-sides) as well.

Email ThisBlogThis!Share to TwitterShare to FacebookShare to Pinterest
Labels: 1981, The Beat, Wha'ppen