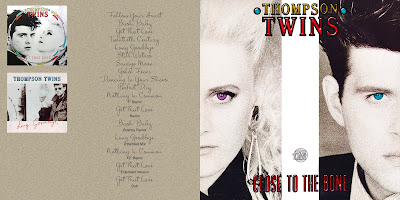 So, the mature and mellow sounding Thompson Twins.  How incredibly dull.  But, I wouldn't be posting it if I didn't feel that it had some value.

I was at my cousin's house in a little poe-dunk city in a Great Plains state when we were listening to a local radio program.  They were playing one of those pre-recorded interviews with the band on this album,  and telling us how great it was.  The local DJ got on there, and said that the next ten people would get autographed copies of the record for free.  SO, we jumped on their phone and got in.  Number seven!  She won a free autographed copy of the album!!!!  The next day we go down to pick it up at the station, and they had her the album with some signatures on it.  Cool.  We look closer, and the "autographs" on the record were those of the top local DJs for that station.

Class acts, they are.  I will always enjoy some TT whether it be from their very first albums, blockbuster albums or their later ones, well into the Babble years.  The later solo material in the 00s and beyond, meh.  It's not the same.

What surprised me the most on this album was the utter lack of singles and mixes.  The previous albums had 4-5 singles and a huge slew of mixes that could fill discs and discs.  I could barely find enough material to fill one disc, for this one.  Sad, too bad.

Obviously not one of their best, but an essential part of every balanced TT collection.  Gotta have it.

Email ThisBlogThis!Share to TwitterShare to FacebookShare to Pinterest
Labels: 1987, Close To the Bone, Thompson Twins