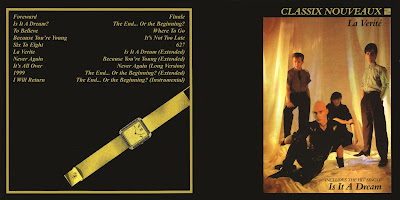 In the mid to late aughts (later than 05 but before 09) I found music blogs exploding all over the internet, in ways I never knew and never imagined.  It was like the beginning of a new music renaissance.  I discovered hundreds and hundreds of new bands and artists in genres across the spectrum of music.  I was in awe and amazed.

One of the genres that I enjoy most - New Wave/New Romantic - gave me a host of new bands to listen to that, although weren't as good as Duran2, were very good and enjoyable.  Blancmange, Ultravox, Visage, and Classix Nouveaux.  I'll talk about those other bands in later posts, today is about CN and their album La Verite.

Surprisingly, I can't really find a whole lot of material about these guys.  At least not enough that I would care about.  Allmusic says the following - "Classix Nouveaux was one of the first new romantic acts in England. Although Classix Nouveaux's more guitar-heavy sound separated them from the mostly synthetic rhythms of Japan and Ultravox, the group's appetite for stylish fashion and danceable keyboards had them quickly associated with the new romantic movement. Formed in 1979 with Sal Solo (vocals), Mik Sweeney (bass), BP Hurding (drums), and Jak Airport (guitar), Classix Nouveaux originated in the punk underground, namely from the ashes of the controversial X-Ray Spex. After banshee wailer Poly Styrene departed from X-Ray Spex, the remaining members held auditions for a replacement singer. Solo won the approval of a few of Styrene's former bandmates, and they debuted at the Music Machine on August 1979. Airport left the group before they even recorded their first single; he was replaced by Gary Steadman. In 1981, Classix Nouveaux released "Guilty," their most well-known track; "Guilty" was a Top-20 hit in Sweden, and the video received airplay on MTV. A year later, the single "Is It a Dream" reached number 13 on the U.K. charts. Despite successful tours in Yugoslavia, Finland, and Poland, none of Classix Nouveaux's three albums truly catapulted them from cult status in Britain or America. The band split up in 1985, and Solo started recording Christian music."  - And that is more than Wikipedia.

Anyway, they seem pretty good, and a definite companion to my Japan/Roxy/Duran/Ultravox/Visage section in my New Romantic collection.