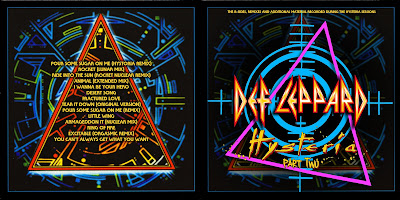 This album had SEVEN singles.  That has to be some sort of world record.  What's amazing, is they could have released ALL of the album tracks as singles, as every single one of them was an absolute classic.  I bet I've listened to this album, literally, almost a thousand times.  It will go down as my most favorite Hard Rock/Heavy Metal album ever.

A rundown of the tracks...

I saw these guys in the summer of 1988 in Chicago at the Rosemont Horizon.  I was almost 17, had a girlfriend, and friends from work who all wanted to go.  Needless to say, the show was fantastic.  If I could see this show again, I would in a heartbeat.  I saw this show and the INXS Calling All Nations tour in the same summer.  What a fucking awesome summer....