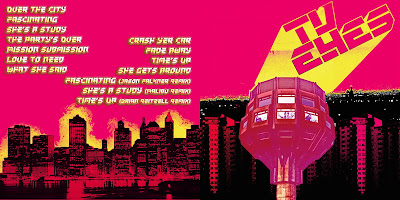 A further entry in my "pleasantly surprised" series, I got this one on a whim, because of the nifty cover. (I used the original front cover for this front cover.  I only remade the back cover)  Listening to it for the first time took a while, but when I finally got around to it, I wondered why it took so long.

The songs are definitely 80s influenced, yet with a modern Indie edge, and that trendy Mark Ronson sound.  Every track has a catchy chorus, and they all seem upbeat and fun.  So, if you're in the mood for doom and gloom, don't listen to this one yet.  The remixes are just as good as the originals, and the one b-side, She Gets Around, actually is a stand out track.  Best song on the album, however is She's A Study.  It reminds me of some other song, but I can't put my finger on it...

Cool thing is, this is a Jason Faulkner concept band.  Jason Faulkner was in the band Jellyfish back in the early 90s.  He's writing and performing tracks that I feel put him on par with any teenage rock star out there.  It's hot, it's relevant, and very fresh.  Hell, the guy's almost 50!  Its too late for you to be sounding like your 22!  He proves that wrong.

The only bad thing about this album is that it was only available in Japan.  He's from California.  He makes an album, and only sells it in Japan.  WHAT?  Can anyone explain why that is a good idea?  I can't see him making more money on it in Japan than in the USA.  Even so, his fan base over there has got to be miniscule.

Whatever.  You just have to pay through the nose for it on Amazon, but at least you got it.