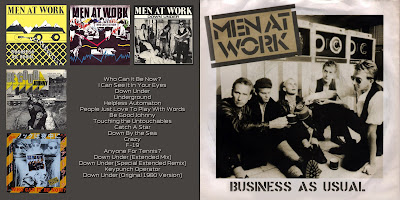 I'm going to be out of town tomorrow and Thursday, so I thought I'd give you another post tonight, to help ease the pain of withdrawal.

This was the VERY FIRST album I ever purchased.  Actually, I didn't purchase it, my Dad got it for me for my 11th birthday.  He liked the song Down Under, so therefore I liked the song Down Under.  It was my first vinyl, and I didn't have my own record player, so I had to use his.  He made me tape it, because that way I "wouldn't wear out the record."  Actually, he didn't want me playing with his stereo.

As a kid I did like the album.  It was okay.  But, I was more interested in Matthew Wilder's Break My Stride, Toni Basil's Mickey, and Micheal Jackson.  So, I played it sporadically amongst my other records, listening to the good songs and fast forwarding through the boring ones.

It wasn't until I was in my twenties before I fully appreciated the album for what it was.  It was as if the music finally revealed itself to me and I listened to it as the first time.  Of course, the singles on this album are great.  But, the other songs on the album really showed the skill that they had, and it's my guess it was mainly Colin.  I mean, he's the only one who continued on, and still writes wonderful music to this day.

Best song, by far, is Down By the Sea.  I could listen to this song on loop for a long time.  But, I don't want to ruin it.

I never knew about their demo songs until late last year.  Not that I was ignorant or something, I just never cared enough to look.  Since I've found them, Keypunch Operator and the original version of Down Under have become something of an oddity to me, even though I put them on this collection.  It's very Power Pop, with a hint of Country.  Interesting stuff.

I never liked the original album art.  My version is much better.

Email ThisBlogThis!Share to TwitterShare to FacebookShare to Pinterest
Labels: 1982, Business As Usual, Men At Work