AIR - Whispers Under the Moonlight - A Remix Compilation 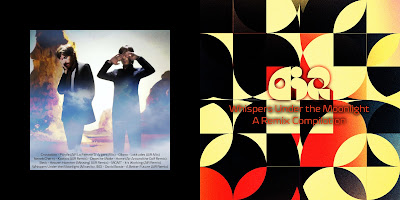 In the late 90s/early 00s, one of my favorite bands was AIR.  I went to see Virgin Suicides at a little art theater simply because I knew they did the soundtrack.  My favorite album was 10,000 Hertz Legend, even though, and especially because it was so wild and bizarre.  I first heard of them from the DM remix of Home back in 96 or 97, and I was on the look out for them ever since.

Well, here is a nice little comp I put together of the remixes that they did for other artists.  When you listen to it, you might think you are listening to an actual AIR album with different guest vocalists, it was sort of my intention.  Their interpretations are rather original and inclusive, so it's quite literally as if they redid the songs completely.  It's all great stuff.

I found the cover art while perusing an art website and thought it would make an excellent album cover, which it did.  And as I was trying to figure out which font to use, I fell upon this one that I used for the AIR logo, and it was a perfect fit.


AIR - Whispers Under the Moonlight - A Remix Compilation
Posted by Unknown at 4:26 PM

Email ThisBlogThis!Share to TwitterShare to FacebookShare to Pinterest
Labels: AIR