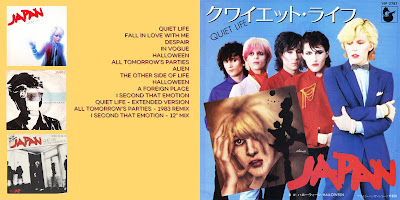 So here's why Duran Duran made it big, and Japan really didn't.

1.  -  They both played New Wave music - BUT - Japan was too Disco oriented, while D2 took it to the next level and created the New Romantic sound.

2.  -  They both wore makeup.  Hell, Nick Rhodes looks like he ripped off David Sylvians look.  - BUT - All the boys in D2 were handsome pretty boys, but, Japan...  Well, they were all ugly.  Sorry, but just a fact.

3.  -  They both had great, singles full of pop hooks.  -  BUT - Japan's album tracks and b-sides were pretty poor, and didn't carry the magic that the singles had.  Japan even reused album tracks from previous albums instead of putting something new on them.  Whereas every track D2 had on their albums were fantastic, and their b-sides and remixes were also terrific.

5.  -  They both had videos for their songs.  -  BUT - D2 put a lot of time and effort and money into making revolutionary and visionary videos.  Japan's videos sucked.

6.  -  Japan split up way too soon.  Had they stuck it out, they could have done better and more.  D2 could have stayed together longer, but that's another story....

Regardless, Japan put out some good music, and they definitely sound like a precursor to D2, or even ripped off by D2.  That conspiracy has been argued for decades, though.  It's best just to enjoy what Japan gave us and groove to the Quiet Life...   again.