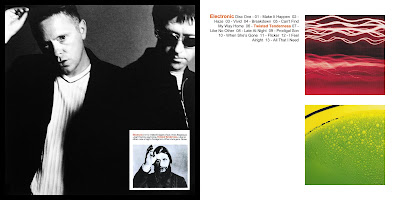 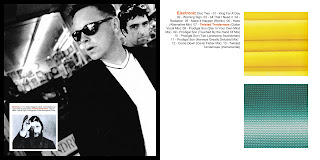 Although I really liked Electronic, I still preferred Revenge and Monaco, simply due to their darker edge.  But, as always, it is Bernard's voice that always sucks me in.  And when you couple that with Mr Marr's excellent skills of writing and musicianship, Electronic's work was always top shelf.

After Raise the Pressure, I was a little nervous about how this album was going to turn out.  I never cared much for RtP, as it seemed tired and worn out.  It was as if they had phoned the performance in.  I guess they were also competing with Grunge and Britrock at the same time.  The fact that Twisted Tenderness was also only going to be released in the UK even furthered my concern.  If you can't even get a US label to pick your album up, there's got to be trouble.

Needless to say, the album was almost as good as their first one, and far better than their second.  Some of the tracks you had to warm up to, but there were other anthems that really stood out as exceptional.  The title track, Twisted Tenderness, and Late At Night are the best ones on the disc, by far.  But, nearly every track is worthy and I will always treasure the work that these guys put forth.

I hate the old man cover, so I switched it with the interior art and staggered the boxes like the LAN single sleeves.  The construction of their covers, too, make it a little odd, as the track listing is on the front.  That being said, When you look at the sleeves above, remember, the two squares go on the front, and the group shot (?) goes on the inside.

For those of you who remember when this album came out...  Can you believe it's twenty years old this year?  And, it's stood the test of time.  Great work!