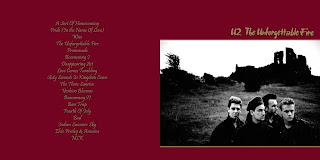 The first U2 album I ever purchased, I got because of the song Pride and watching the video of it on MTV.  As a young teen, I sorta liked the first four tracks, but then I got bored.  It was because I hadn't yet learned how to listen to music.

The Joshua Tree came out, and I instantly fell in love with it, along with everyone else, so I had to go back and buy their back catalog and listen to all of it again.  It took a while, but I eventually learned the beauty and power of The Unforgettable Fire.

Again, dividing side A from side B, I plugged all b-sides and unreleased tracks in the middle.  With the volume of additional tracks, it starts to wear out right before the original album starts back up with Fourth of July.  If you can make it to that, you'll be able to finish the album.  Sometimes, packing all the tracks together on the original album works, sometimes it's better if you just add them as their own "album".  I probably should have done that in this case....

Email ThisBlogThis!Share to TwitterShare to FacebookShare to Pinterest
Labels: 1984, U2, Unforgettable Fire