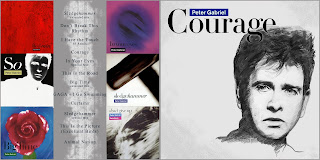 'So' came out my Sophomore year in High School, and I remember sitting in the lunch room at Downers Grove North discussing it with a fellow Soccer teammate.  I was desperately wanting to discuss it and talk about the metaphors and imagery, and lyric and chord structure.  All he wanted to do was mention the weird videos and move on.  Back then, oh, what I could do with a blog, a forum or a chat room.

Mind you, I wasn't some big Genesis connoisseur or something.  In fact, I had no idea who this "Peter Gabriel" was.  In fact, I purchased "The Lamb Lies Down" AFTER PG's 'So' came out, and STILL didn't get it until I took the time to sit down and read the liner notes.  Yeah, big dummy, I know.

But, I really fell in love with 'So'.  I purchased it and U2's Unforgettable Fire and Paul Simon's Graceland at roughly the same time and boy, did I feel sophisticated.  No more teenie-bopper Duran2, no more heavy metal hair, no more Christian bands.  Now, only purely talented musicians with a flare for content for me.

'So' is one of those albums that needs to be LISTENED to.  I've talked about listening to music and then also "hearing" music.  Well, this goes a step beyond that, even.  You've heard, now LISTEN.  Turn the rest of the world off, dim the lights, pour yourself an Irish Whisky, something in the 12s and over a single cube of ice.  Or, get on the metro, plug your headphones in, and watch out the window as the neighborhoods pass by.  But, LISTEN to the album and tell me what you SEE.

Mind you, if you've listened to the album, but haven't HEARD it, then that last step is moot.

When they finally released a decent version of Courage, I found I could actually make a 'So II', that I entitled 'Courage'.  You now have all of the mixes (from that era, I wouldn't put Orbit's Mercy Street in this mix, maybe in US).  You have all of the b-sides that were originally from that era, I took out the ones from previous albums.  I put Lori Anderson's 'This is the Picture' for a contrast to the PG version.  And then the unreleased Courage.  All in all, it makes for a great listen.

Although I was happy with the material we did get when PG re-released the 'So' album several years ago, I was still somewhat disappointed that none of the b-sides were included, and there weren't any real unreleased tracks at all.  Just proto-pre-production of tracks we already had.  This little collection here wraps that all up!!!!

Email ThisBlogThis!Share to TwitterShare to FacebookShare to Pinterest
Labels: 1986, Peter Gabriel, So