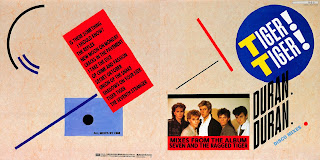 New Moon On Monday was the first encounter I had with Duran Duran.  I picked it up at Richman Gordman shortly before I moved to Chicago.  I bought it because of the snazzy picture sleeve, and I didn't have any picture sleeves yet.  It was the third 45rpm single I had ever purchased, behind Matthew Wilder's Break My Stride and Peter Schilling's Major Tom.  At the time I bought it, it was an impulse buy, and I wasn't overly impressed by it.

Shortly after moving to Chicago, I laid on the floor of my parents living room, with the stereo up loud and New Moon on Monday (along with the Tiger Tiger b-side) blaring in my ears.  It grew to be in my top 5 Duran Duran songs ever, to this day.

I purchased 7&tRT on cassette shortly after that and nearly wore the thing out.  I discovered that Union of the Snake had another song called Secret Oktober that I'd never heard of.  And, a guy at school named Jay Duffy had a cassette maxi-single of the Reflex with a different mix than the album (up until this time, I didn't know what a "remix" was.)  I was always a fan of that particular remix, although the remixes of the rest of the singles from 7&tRT were rather dull.

For the most part, Duran2's remixes consisted of what seemed to be an instrumental version of the song, cut with a 7-Inch version of the song.  Dull and dreary.  The Tiger Tiger mix was somewhat different, but the rest left little interest, if only for completions sake.

Fan made mixes of songs have  become second nature and to be expected, in this day when you can have a virtual recording studio on your laptop.  You give a talented fan a clean copy of every official, professional mix of a song, along with the original mix and maybe even the stem tracks, and that fan can come up with some wonderous stuff.

Catbirdman (I so very much hate that name) is a Duran Duran fan who started making mixes of Duran tracks back in 2009, 2010.  He started with the first album, and made it though Arena and the Wild Boys before he quit.  The tracks he was able to complete are border on perfect examples of how Duran2 should have mixed/remixed their songs for singles.

As 7&tRT was my first Duran2 album, I've included all of the songs that CBM made for that album, with the exception of an alternative version of Cracks In the Pavement and also Faith In This Colour.  I've included Is There Something I Should Know, as this track was recorded and released about the same time as 7&tRT, and the track has no business on the first album anyway.

I used the Tiger Tiger EP picture sleeve as this was originally the collected mixes from 7&tRT.  It might seem a little dull, but I think it's because the graphics you generally see include an Obi strip, as it is a Japanese only release.  I didn't care for the strip as it cuts out several of the boys in the pic on the front.

Later on, I will post more mixes from 7&tRT on a 2-disc set.  I'll also post more Catbirdman mixes, as he has two more albums worth.  I'll also eventually hit almost every Duran2 track and album, as I have it all.  And I do mean all.  It's sort of sickening to look at sometimes.