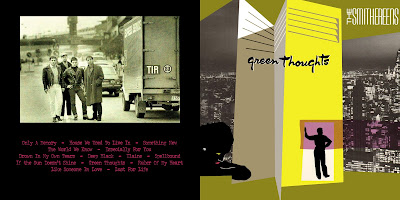 This is another one of the albums that I remember specifically while reminiscing about Chicago in the 80s.  I got this cassette probably the last month or so that I lived there, and was my cruising tape during my last couple dates.  It was hip, progressive, catchy and rather manly.  I was so very concerned about superficial things like that, back then.  I specifically remember driving north down Michigan Avenue in downtown Chicago, just past the Art Institute, right before going in between the buildings.... But, that's only a memory.  (Guffaws and slaps his knee)

To me, it has stood the test of time, sounding as sweet and thunderous today as it did back then.  To me, it is probably their best album, followed closely by their Especially For You album and their Live EP (The Seeker kicks ass).  Only A Memory, House That We Used To Live In, The World We Know and Especially For You stand out to me, and side two is a little weaker, but still really good.

After this one, they had a couple other good albums, but none that compared to this.  Their Beatles cover album and their version of Tommy are pretty good, but that's not their own material.  They are still playing strong today, and I would love to go see them live.  A twenty song set, in a club with a low ceiling, smokey, and about 200 people.  A short, two foot stage and no grandeur.  Love it.

I THINK I have all the tracks, here.  When I originally compiled this, I think I remember that there was one or two tracks that I couldn't find.  I could be wrong.  If you have any tracks that you think need to go on here, let me know, and send me the tracks!