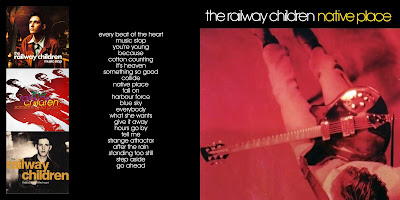 The first song I ever heard by the Railway Children was It's Heaven.  It came on my local college station back in 1990 right after a Hollow Men song, and I think just before Manna & Quail by Caterwaul.  Or maybe that's just how my brain remembers it, as there were so many GREAT Indie/Post Punk tracks that came out just before Grunge and Industrial music polluted the landscape for the next decade.

I got the album on cassette in a Cut-Out bin, for about 3 bucks.  It had that nice little slice cut out of the bottom of the spine on the jewel case, I guess that's how they marked the tapes for cut-outs, or maybe they were cut-outs because of that mark.  It was like someone had run a circular saw right across the bottom of the spine, a nice hole about an eighth of an inch thick, and the thickness of the case.  BUT I DIGRESS.  Like a fucking bird dog, I am.

It took me a while to get into the album, as I was looking for the catchy pop hooks and the synths that It's Heaven has.  That one song stands out different than the rest of the tracks on the album, I think.  I couldn't really find any others even close.  As it is, after a while, it grew on me, and I realized that the pop hooks were there, just not glaringly obvious.  The melodies are very personal and soothing, and the entire album is longing and heartfelt.  To me, it stands out as a singular masterpiece from the Children, with few contenders as lasting.

I had planned on posting this 3 or 4 months ago, the cover and collection done more than a month in advance.  But, less than a week before I post it, Ricky posts the original album over on Madchester Rave On.  I was dumbfounded.  I've had coincidences like that numerous times with the other bloggers, but that one was about as close as it had ever come.  SO, I threw it all the way out into late June.  When I first heard the album, it was mid-November, so trying to listen to it in the middle of the summer is a little disconcerting.  You ever have that problem?  Or am I the only freek in the room?